Ask us a Question View Our Products

SC cut crystals are an alternative to the more widely used  AT crystals and are often a better choice for certain applications such as oven controlled crystal oscillators and high temperature oscillators. This paper will discuss the variants of the true SC cut units and their characteristics.

The SC cut stands for Stress Compensated and was developed in the late 1970’s in an effort to find a thickness shear mode with the least sensitivity to mechanical and thermal stress. The result was a compound angle cut quartz crystal with an X axis rotation, Phi Ø, of approximately 22° and a Z axis, Theta Ө, rotation of approximately 34°.

Cutting quartz with compound angles poses numerous problems during manufacturer and adds cost in measuring the critical angles and maintaining them during the various lapping and polishing processes.

Specialized X-Ray goniometer are required to measure the relative angles to the quartz face with respect to the X and Z axis. Necessary tolerances for the SC cut Z axis are typically ±10” as opposed to ±30” for an AT Cut.

The quartz blank however will not retain this geometry during the lapping process as the lattice structure of the quartz is not parallel to the faces of the blank. This results in a rotation of both X and Z angles as the quartz is lapped to dimension, requiring one or more angle correction processes to maintain specification.

The thermal response of the SC cut turns out to be ideal for OCXO applications as it has a Lower Temperature Turn Point (LTTP), with a very shallow slope in the range of 70 to 85°C. The slope is shallow as a result of the inflection temperature being in the range of 90°C as opposed to 25°C in the AT cut.

More recently, oscillators have needed to operate in a range of (80 ~ 95)°C which causes manufacturing problems as the crystals become increasingly difficult to make as the LTTP approaches the inflection temperature. To cope with this either IT cuts or Modified SC Cuts are used. The IT has an Upper Temperature Turn Point (UTTP) in the range of 85 to 105°C however it does not share the lower level of mechanical stress sensitivity of the SC. With the Modified SC, changes are made to the Phi angle of the SC to increase the inflection temperature and thus allow for higher LTTP temperatures. These types of SC are also referred to as EY cuts and in more extreme cases EY2 Cuts.

Despite the added complexity of manufacture, there are numerous advantages to this technology. One of the obvious benefits of lower mechanical stress sensitivity is a corresponding improvement in the vibration sensitivity. In addition it also results in an improved long term aging response derived from a lesser sensitivity to the relaxation of mounting stresses over time. Other key characteristics include:

Another major difference is the SC cut has two modes fairly close together. The C mode which has a classic cubic thermal coefficient and the B mode which has a steep positive slope operating approximate +10% from the C mode. It is therefore essential that the oscillator has the capability to trap out the B mode if operation on the C mode only is desired.

The following graph shows the relative slopes of both modes for a fundamental SC cut. 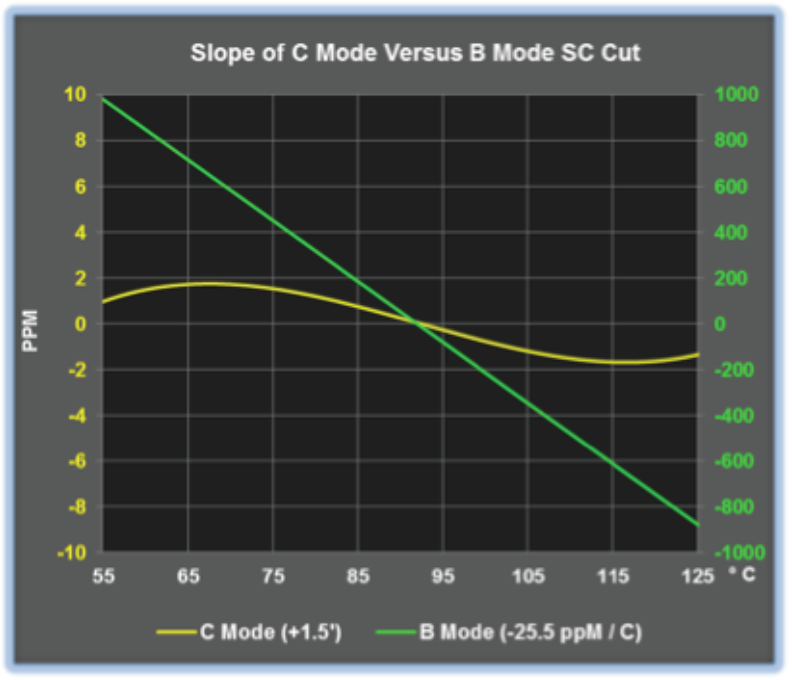 There are some oscillator designs that can take advantage of the B mode. It’s almost linear slope can be used as a temperature sensor, accurately indicating the actual temperature of the quartz element directly. Such oscillators have both modes active and feedback the B mode information into a digital compensation network. This can allow for more accurate oven control or the ambient operation of SC controlled oscillators. It can also be useful in the control of directly heated resonators.

This variant is the most commonly used SC crystal in OCXO applications. It has a useful LTTP that can be as high as 95°C. This is achieved by increasing the Phi angle approximately +2.5’. The crystal has a higher C0/C1 ratio but the same Q factor as the SC. The flexibility of this approach allows for lower cost processing while maintaining excellent parameters. It also allows the use of higher Theta angles whose turn points are easier to control.

This cut has been used for a long time to cover operating temperatures 90°C and above. It has a lower inflection temperature than the SC types but shares the characteristic of having a strong unwanted mode close in to the main mode. The C1 is higher and the ESR is lower than the SC Cuts which can be useful where an increase in frequency tuning is desired. The upper temperature turn point is suitable for oven controlled oscillators and the lower turn point can have applications at ambient temperatures. This cut could be viewed as another modification of the SC Cut on the lower side that has a reduced mechanical stress compensation characteristic.

The following 2 graphs show how the ESR and C0/ C1 ratio are influenced by the change in Phi angle for a 100MHz SC 5th overtone and a 10MHz 1 diopter plano-convex SC 3rd overtone. The data is empirical. The C1 is derived by dividing the C0 value by the C0/C1 ratio. All values being expressed in pF. 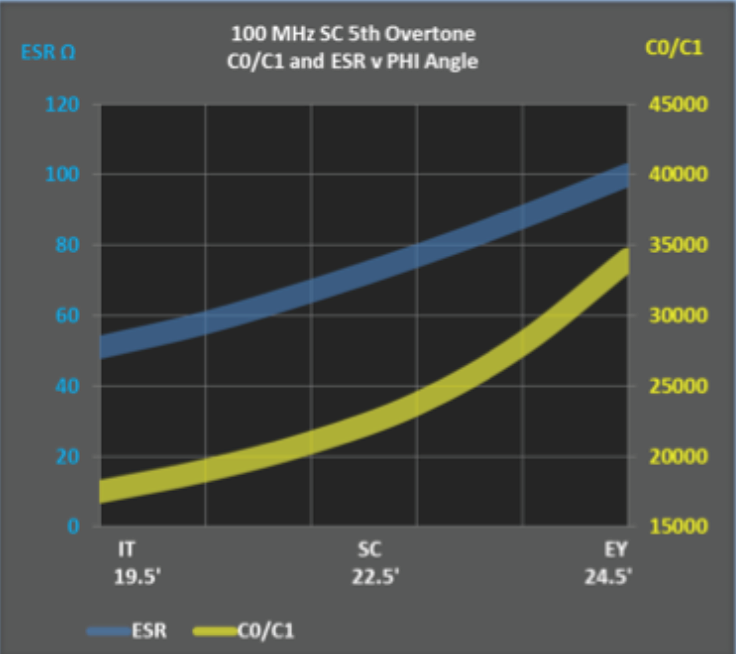 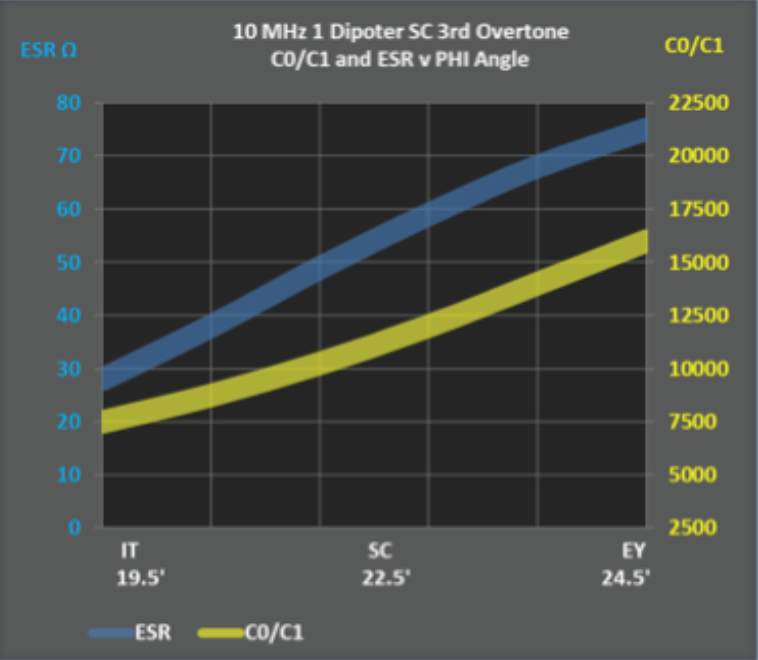 This phenomenon is another consideration when choosing the ideal resonator. Interestingly, the Q factor remains fairly constant over this range of cuts as the change in C1 is balanced by a corresponding change in ESR.

Commercial applications require quartz crystals to operate in a range of -40 to 85°C and military applications over the range -55 to 125°C. There are however requirements where quartz crystals are needed to operate at much higher temperatures than this.  For example deep well drilling monitoring and high temperature thickness film monitoring. In cases like these, the AT cut is not a good choice. The IT cut often selected for high temperature applications is also not the best choice. The following graph shows a variety of crystal cuts and their ideal Theta angle offsets optimised for +200°C. 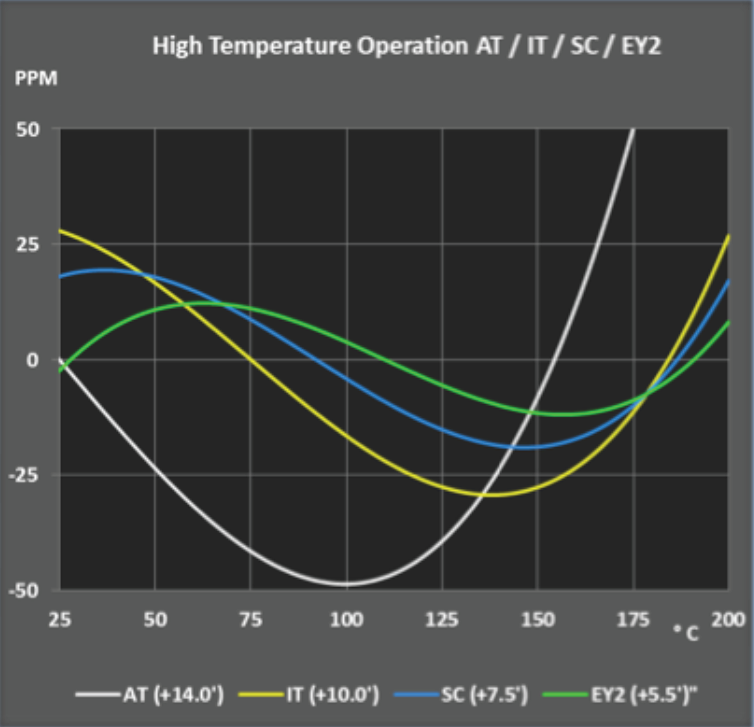 For this temperature range, the highly modified SC or EY2 gives the best stability only requiring a +5.5’ Theta offset and holding better than ±15ppm.

There are more choices to consider than simply an AT or and SC cut crystal. Several variants of the SC are available with very similar Q factors but very different thermal and motional parameters. All of them need to be considered when designing a frequency control project.